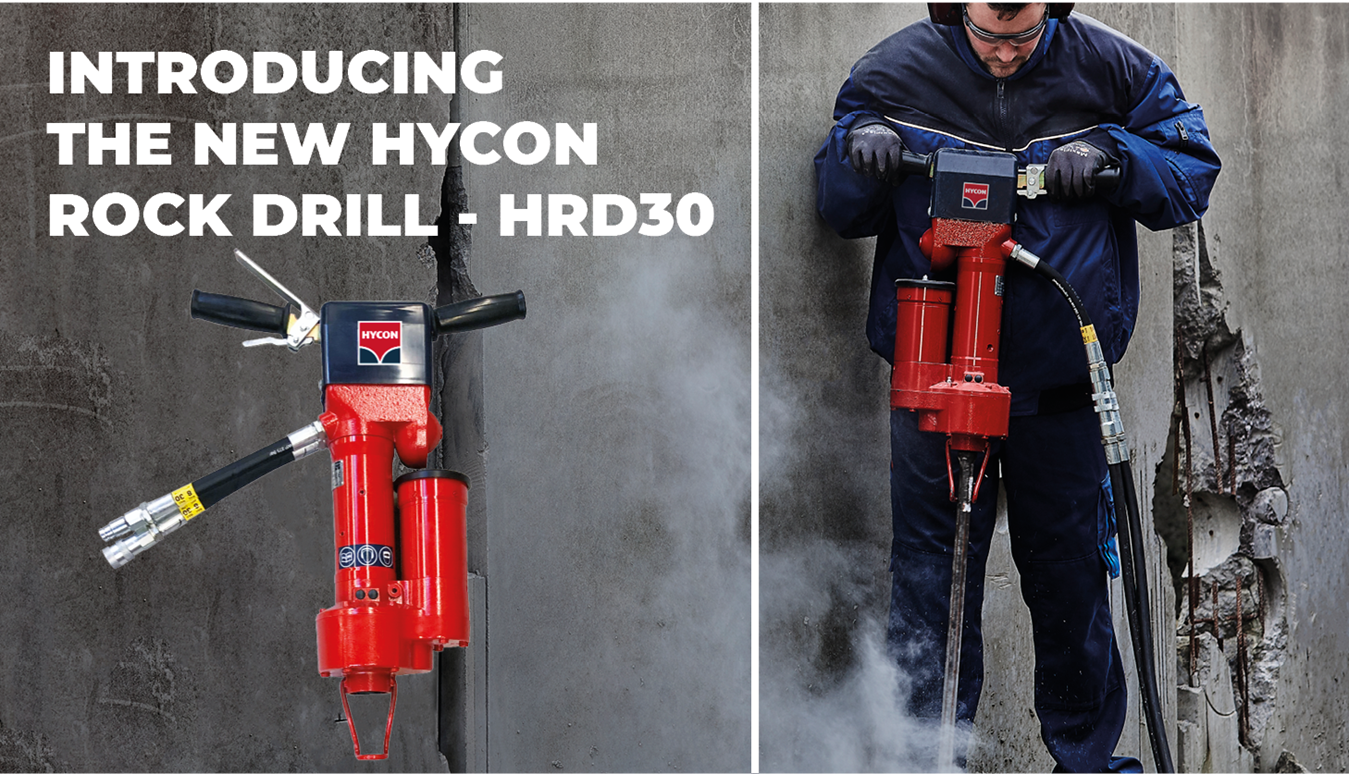 After two years of intensive research and development, HYCON will be introducing its new HRD 30 Rock Drill solution to participants at bauma 2019 in Munich, Germany. The hydraulically powered, ultra-portable drill presents a compelling alternative to cumbersome, air-powered equipment – and is ready for sale as from August 1, 2019.

The next generation of rock drills
The construction industry has used pneumatic, hand-held rock drill hammers for decades – despite the difficulties of towing or even airlifting heavy air compressors to every new job.

“Conventional rock drills require large and heavy compressors to operate them. These compressors can only be towed, so if you also need to take a excavator to the worksite, you’ll most likely need to make two trips,” says HYCON CEO, Martin Møller. “Using hydraulics, you can transport a compact power pack in the truck, or even use the excavator’s own hydraulics to work the drill.”

Hard design journey
Even for a company like HYCON, with decades of hydraulics expertise, designing a cutting-edge solution that can do a better job of drilling holds in hard concrete and granite rocks while simultaneously being more compact isn’t an easy task. Using an off-the-shelf rotation motor, for example, would be too bulky. Luckily, the company had developed its own, well-proven motor for HYCON’s range of hydraulic saws, requiring minor modification to suit. The air-driven flushing system for removing debris from the drill hole is also HYCON’s own unique design. Designed with inspiration from the way in which vane type compressors work, the built-in compressor delivers high airflow at low pressure.

Tough tests
A revolutionary rock drill needs to face the hardest of tests. HYCON imported a 12-ton block of black pearl granite, from Larvik, Norway, for its factory to thoroughly test each prototype. Real-world test units were also distributed to a number of customers, primarily in Sweden and Norway, for granite drilling and to Germany, Belgium and Holland to test concrete drilling. Testers reported more power and better performance when compared with conventional air drills.

“People tell us that the new drill is more stable than typical pneumatic rock drills, which matters a lot when you may have to wrestle with the drill for hours at a time. That fact alone made it hard to get the prototypes back!” says Martin Møller.

Better holes
The HRD 30 Rock Drill is ideal for deep and large-diameter anchoring holes as well as blast- or splitting holes measuring between 25-50 millimeters. It delivers more precise hole sizes, too, which is useful when working with non-dynamite destruction solutions such as expanding smoke cartridges or an expanding cracking agent (Bentonamit).

“In Sweden, one of the testing contractors was able to create nicely rounded holes that were very straight and far closer to the desired tolerance than a pneumatic drill can achieve. If you’re putting in an anchor bolt for a power mast, for example, you really need that sort of accuracy.”

Weighing up the benefits
At first glance, the HRD 30 Rock Drill itself may seem more expensive than a traditional pneumatic rock drill. However, on closer inspection, the total cost of kit for a pneumatic rock drill and compressor is higher than HYCON’s revolutionary new hydraulic solution.

Given its remarkably easy portability as a ready-to-operate package, the new HRD 30 Rock Drill is particularly suited for utility roadworks such as traffic signage, barrier erection or gas detection. The low weight of the drill and power pack makes the HRD 30 the perfect solution when erecting power masts or antennas on mountaintops without having to airlift a heavy air compressor.

Andreas Redebratt of Sweden-based Powertools was involved in user experience testing of the rock drill:

“This hydraulic drill is more practical, efficient, economical and reliable than a pneumatic drill. It’s easier to service and safer to operate, too. So I believe it’s well worth the investment.”

Contact us for more information on the new HRD30 ROCK Drill

We offer a wide range of handheld hydraulic tools for various segments and applications.
Please take a look, and contact us if you have any questions, queries or the like.